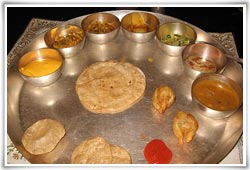 Ahmedabad is a paradise for food lovers. The typical Gujarati thali that is served in the restaurants consists of real mouthwatering dishes. The cuisine of Ahmedabad, India has a peculiar taste. A different kind of sweet flavor is prevalent in almost all the food items. Ahmedabad cuisine mainly consists of vegetarian dishes. However, non vegetarian delicacies are also available in the restaurants. Read on to know more about the traditional food of Ahmedabad, Gujarat.

Gujarati meal usually consists of rice, bread, rotli and vegetable curry called 'Shaak'. Different kinds of breads are served in the meal such as rotli, thepla, maal purah, puri, bhakhri, and puran-pohli. For snacking, the people of Ahmedabad usually have Ghari and Khakhra. Ahmedabadis cook their food in the Gujarati style, which is simply delicious. Ahmedabadis make an extensive use of ghee in preparing their meals.

There are many Gujarati dishes that are relished not just by the Gujarati community, but by the people of all communities. To name a few, we have dal-dhokli, chevdoh, Dhokla, undhiyu, Khaman, bhusu, fafda, dhokli, papdi, and Sev mamra. The meal is usually accompanied by a dessert. The cuisine of Ahmedabad is a blend of several flavors. The food of Ahmedabad is so lip smacking & yummy that it will make you fall in love with it.