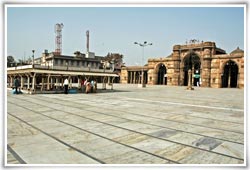 There is no particular religion followed by Ahmedabadis. Many religions coexist in Ahmedabad, thereby indicating the strong unity in diversity. Religions are different, but the basic teachings are the same. Hinduism is the main religion of Ahmedabad; however, other religions that are prevalent include Buddhism, Jainism, Islam, Zorastrianism and Christianity. There are plenty of religious places in Ahmedabad, consisting of temples and mosques etc. To know about the pilgrimage places in Ahmedabad, read on…In this section, we will throw light on the following places of worship in Ahmedabad:

Ahmed Shah Mosque
Sultan Ahmed Shah mosque in Ahmedabad is a religious place for Muslims that is well known for its architectural designing. It was constructed in the year 1414 A.D. by Sultan Ahmed Shah, the founder of Ahmedabad city. Thus, the mosque has been named after its founder. Lying on the left side of the famous Bhadra Fort, the mosque is very appealing to look at. It is one of the oldest mosques of Ahmedabad.

Akshardham Temple
A specimen of fine craftsmanship, the Akshardham temple in Ahmedabad is one of the largest and most prominent temples in the entire state of Gujarat. Located in Gandhinagar city, the famous Ahmedabad Akshardham temple is a place, which consists of a number of things under one roof like art, education, architecture, exhibitions and research. It is truly an architectural masterpiece.

Hathee Singh Temple
Constructed in the year 1850 AD, Hathee Singh temple is a very famous Jain temple. It has been named after its founder Seth Hathee Singh, a prosperous Jain merchant. Hathee Singh Jain temple of Ahmedabad was built in the dedication of the 15th Jain Trithanakara named Dharmnath. The temple is known for its fabulous architectural styling and designing that consists of intricate carvings.

Jama Masjid
Lying opposite to Mahatma Gandhi Road, on the eastern side of Teen Darwaza, Jama Masjid is one of the most splendid mosques of India. Constructed in the year 1423 A.D, the Ahmedabad Jama Masjid was established by Sultan Ahmed Shah, the founder of the Ahmedabad city.

Rani Rupmati Mosque
Located on the Northern side of the Ahmedabad city, Rani Rupmati mosque was established by Sultan Mehmud Beghara. Named after Rani Rupmati, the wife of Sultan, the mosque was constructed during 1430-1440 AD. Some of the features that best describe the Rani Roopmati mosque of Ahmedabad, Gujarat are impressive domes, carved galleries and tall minarets.

Sidi Sayed Mosque
Located near Lal Darwaza in Ahmedabad, the mosque of Sidi Sayed is one of the most prominent mosques in the Ahmedabad city. Constructed in the year 1573, the mosque was established by Sidi Sayed, a slave of Sultan Ahmed Shah. Sidi Sayed mosque in Ahmedabad, India consists of ten semi circular windows, the appeal of which is accentuated by the splendid mesh covering them, which is more popularly known as 'Jali'.

Swaminarayan Temple
The first and foremost Swaminarayan temple was built at Kalupur in Ahmedabad. Being the most prominent temple, it is always thronged by people. People come from different parts of the country and congregate here in this temple to seek the blessings of the deity. Dedicated to Lord Swaminarayan, the temple boasts of its exquisite wooden carvings.