Given here is information on the lakes at Ahmedabad in Gujarat. Check out the lakes of Ahmedabad, India.
Ahmedabad: Ahmedabad Lakes 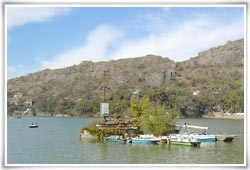 The lakes of Ahmedabad, India serve as an oasis of tranquility in the midst of the hustle bustle of the city life. Very peaceful and calm, the lakes provide a breathtaking view, thus making it a very fascinating experience for the visitors. To top it, the chirping of the migratory birds further complements to the whole mood, thereby rejuvenating you completely. There are basically two lakes in Ahmedabad, namely, Kankaria Lake and Chandola Lake. Read on to know more about the lakes in Ahmedabad, Gujarat…

Kankaria Lake
Kankaria Lake is a multisided lake that was built by Sultan Qutab-ud-Din in the year 1451 A.D. It is basically an artificial lake with thirty four sides. Lying on the south eastern side of the Ahmedabad city, the lake also has a fascinating island summer palace. People are of the say that Kankaria lake of Ahmedabad was often visited by the Mughal Emperor Jahangir along with his wife Empress Noor Jahan .