The sun temple at Modhera in Gujarat is worth seeing. Read about the Modhera sun temple.
Ahmedabad: Ahmedabad Excursions: Modhera Sun Temple 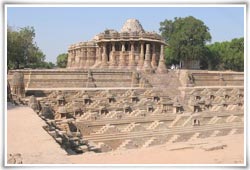 Situated at a distance of 102 kms from Ahmedabad on the bank of the river Pushpavati, the Modhera sun temple was constructed in the year 1026 AD. It was established by the King Bhimdev of the Solanki dynasty in the dedication of Lord Surya. It is one of the finest architectures of the eleventh century. One of the best features of the temple consists of the carved torana arches. Read further to know more about the Sun temple at Modhera in Gujarat…

From the point of view of structural designing, the sun temple at Modhera is truly the one of its kinds. The Modhera sun temple encompasses three main chambers, namely Surya Kund, Sabha Mandap and Guda Mandap. Surya Kund is basically a beautifully carved stepped tank that was named after Sun God. Sabha mandap is the hall, where people gather for discussions on religious topics. Guda Mandap is the sanctum sanctorum, also known as the main temple.