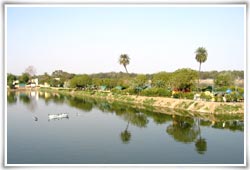 Kankaria Lake is a multisided lake that was built by Sultan Qutab-ud-Din in the year 1451 A.D. It is basically an artificial lake with thirty four sides. Lying on the south eastern side of the Ahmedabad city, the lake also has a fascinating island summer palace. People are of the say that Kankaria lake of Ahmedabad was often visited by the Mughal Emperor Jahangir along with his wife Empress Noor Jahan. Read on to know more about the Kankaria Lake in Ahmedabad, India…

Kankaria Lake is one of the most favorite picnic spots of the people of Ahmedabad. Adjacent to the lake, lies a beautiful garden called Nagina Wadi. For people seeking peace, there can be no better place than Kankaria Lake. The pleasing view of the lake, the humming and chirping of birds and the greenery bordering the lake will make you fall in love with this place. You can also avail the boating facility. Kankaria Lake provides a beautiful view of the sunset. There is also a zoo and children's park located nearby the lake.