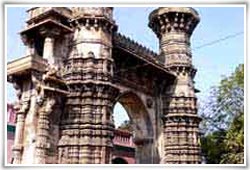 Ahmedabad is well known for its swaying minarets, more commonly known as Jhulta Minar. A classic example of superb craftsmanship, Jhulta Minar is actually a part of the mosque Siddi Bashir. The mosque has been constructed in such a manner that, if you apply a little force on its upper arc, the Minar tends to sway. For kids, Jhulta Minar in Ahmedabad, India is a real fun place.

An Englishman made an attempt to demolish one of the minarets of the mosque, but all in vain. He did so to unravel the mystery behind the swaying of minarets. The mechanism that leads to vibration is still a mystery. An interesting thing about Jhulta Minar is that, it can even withstand the pressure of fast moving trains that pass from a distance not lying very far from the minaret.