Teen Darwaza is the oldest as well as the longest gateway of Ahmedabad, India. Read about Teen Darwaza.
Ahmedabad: Monuments : Teen Darwaza 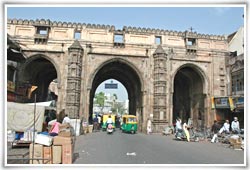 Teen Darwaza is an architectural marvel, the beauty of which is surely going to leave you awestruck. Consisting of gorgeous arched gates, Teen Darwaza is one of the longest as well as the oldest gateways of the Ahmedabad city. It was established in the year 141 A.D. by Sultan Ahmed Shah, who founded the city of Ahmedabad. Read on to know more about Teen Darwaza of Ahmedabad, India…

Lying adjacent to the famous Bhadra fort, Teen Darwaza has been intricately carved. Initially, it served as an entrance to Royal Square at Bhadra Fort. The great Mughal emperor Jahangir used to come here along with his beloved wife Noorjahan, to take a look at the procession that started from this grand gateway and went nonstop till Jama Masjid. The walls and pillars of Teen Darwaza are beautifully designed.

Teen Darwaza of Ahmedabad, India is truly an epitome of the fine Islamic architecture. The windows of this fabulous monument are semi circular and adorned using mesh work. The central window depicts the tree of life. Five palm trees are shown that are covered with snakes. This portrayal also serves as the symbol of the Gujarat Government. This regal citadel is one of the most sought after tourist destinations in Ahmedabad.