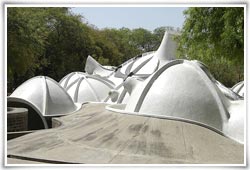 Hussain Doshi Gufa is an underground art gallery located in Ahmedabad that depicts the works of the famous Indian painter named M.F.Hussain. It has been designed by the famous architect B. V. Doshi. Thus, the art gallery has been named after the two eminent personalities, Hussain and Doshi. The gallery is more popularly known as Amdavad ni Gufa. It has been given the name Gufa, as its structural design resembles a cave.

For the art lovers, Hussain Doshi gufa is a real feast for eyes. The Hussain Doshi Gufa art gallery in Ahmedabad lies in the surrounding areas of the Center for Environmental Planning and Technology. This structure has been constructed using simple hand tools and that too by unskilled workers. The art gallery has been built on the basis of computer aided designs.