Sabarmati ashram in Ahmedabad, Gujarat was the central point from where the struggle for India's Independence was started.
Ahmedabad :Museums: Sabarmati Ashram 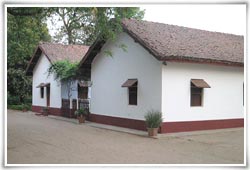 Set up in the year 1915, Sabarmati ashram was the central point from where the struggle for India's Independence was started. Till the year 1930, the ashram at Sabarmati was the home of Mahatma Gandhi. Bordered by shady trees, the atmosphere over here is very tranquil and peaceful. During the Indian struggle for independence, it was also referred to as the Satyagrah Ashram. Read further to know more about Sabarmati Ashram in Ahmedabad, Gujarat…

The ashram houses a museum, library, auditorium and photo galleries. The museum exhibits the life of Mahatma Gandhi. There is an archive of letters written by Gandhiji. Also, the museum contains the manuscripts of his articles; several films composed on the life of Gandhiji & India's freedom struggle etc. There are plenty of books in the library that will give you a valuable insight into the life history of Mahatma Gandhi.

Anyone can come and visit the Gandhi ashram located alongside the Sabarmati River. It is open from 8.30 am to 6.00 pm evryday. Amidst the mad rush of the city, Sabarmati ashram serves as a great retreat. Sabarmati Ashram of Ahmedabad has a lot of significance for people of India, as our great freedom fighter Gandhiji lived here for quite a long time from 1917 to1930. For people interested in knowing about the freedom struggle of India, this is just the perfect place. Infact, it is a storehouse of useful piece of information.