Sultan Ahmad Shah's mosque in Ahmedabad, Gujarat is one of the oldest mosques of the city.
Ahmedabad: Religious Places: Ahmed Shah Mosque 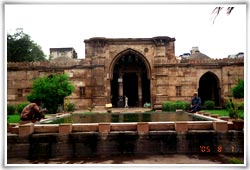 Sultan Ahmed Shah mosque in Ahmedabad is a religious place for Muslims that is well known for its architectural designing. It was constructed in the year 1414 A.D. by Sultan Ahmed Shah, the founder of Ahmedabad city. Thus, the mosque has been named after its founder. Lying on the left side of the famous Bhadra Fort, the mosque is very appealing to look at. It is one of the oldest mosques of Ahmedabad. To know more about the Ahmedabad Ahmed Shah Mosque, read on…

The prayer halls (Mehrabs) of the Ahmad Shah mosque have been intricately designed using black and white marbles. There is a separate chamber for women in the mosque. Towards the north east corner, lies the prayer room for women, which is more popularly known as 'Zenana'. The Ahmad Shah's Mosque in Ahmedabad, Gujarat was initially a holy place meant only for the royal class. Only the nobles could come here for worshipping. Well, when it comes to holy places, it is one of the most sought after tourist destinations in Ahmedabad.