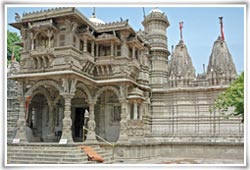 Constructed in the year 1850 AD, Hathee Singh temple is a very famous Jain temple. It has been named after its founder Seth Hathee Singh, a prosperous Jain merchant. Hathee Singh Jain temple of Ahmedabad was built in the dedication of the 15th Jain Trithanakara named Dharmnath. The temple is known for its fabulous architectural styling and designing that consists of intricate carvings. Read further to know more about Hathising Temple in Ahmedabad, India…

It is an architectural marvel that has been built using beautiful white marbles. Hathee Singh Jain temple is a double storied construction that has a dome on the front side. The other two sides of the temple consist of lavishly carved out galleries. The temple built by Hathising is one of the most splendid Jain temples of India. The temple has a cemented courtyard that is enclosed by a row of cloisters, which contains 52 holy places. Each of the shrines consists of an image of a Tirthankara. Well, Hathee Singh Jain temple is certainly worth a visit.