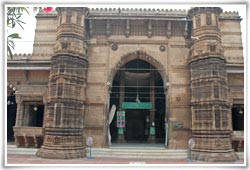 Located on the Northern side of the Ahmedabad city, Rani Rupmati mosque was established by Sultan Mehmud Beghara. Named after Rani Rupmati, the wife of Sultan, the mosque was constructed during 1430-1440 AD. Some of the features that best describe the Rani Roopmati mosque of Ahmedabad, Gujarat are impressive domes, carved galleries and tall minarets. The mosque consists of three domes that are duly supported by pillars. The dome that lies in the central position illuminates the mosque with natural light.

The structural design of the Rani Rupmati mosque of Ahmedabad represents a blend of Hindu and Muslim architecture and this is what makes it stand out above all others. Due to the natural calamity that affected the Ahmedabad city in the year 1818, the mosque lost one of its minarets. The ceiling of the dome is beautified with the Hindu style patterns. The prayer hall of the mosque is of great aesthetic value, consisting of exquisite carvings.