Located in Ahmedabad, the mosque of Sidi Sayed is famous for its mesh. Read about the Sidi Sayed mosque.
Ahmedabad: Religious Places: Sidi Sayed Mosque 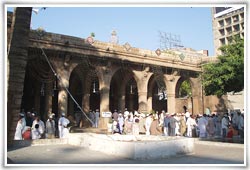 Located near Lal Darwaza in Ahmedabad, the mosque of Sidi Sayed is one of the most prominent mosques in the Ahmedabad city. Constructed in the year 1573, the mosque was established by Sidi Sayed, a slave of Sultan Ahmed Shah. Sidi Sayed mosque in Ahmedabad, India consists of ten semi circular windows, the appeal of which is accentuated by the splendid mesh covering them, which is more popularly known as 'Jali'.

This monument has gained a worldwide recognition, due to its splendor. This skillfully carved mosque is truly the one of its kinds in the whole world. The Jali screen windows represent the Indo-Saracenic styling, which is admired by people all over the world. Consisting of delicately carved windows, the mosque is known for its stone tracery. The construction work of the Sidi Sayed mosque was taken up in the last year of the Sultanate rule in Gujarat.